The following post was originally written as an abstract for a conference presentation. It was, however, not accepted.
I've published a more extensive version on my blog here.
This post has previously been published as on EducationLab's blog here. But EducationLab is ceased to exist and I've therefore decided to republish the post here.

“There are two fundamental approaches to OLL [online learning]. The first is to provide the tools and techniques for individuals to access and organize information to sustain existing distance education practices that maximize learner independence. The second is to use the full capabilities of OLL to create purposeful communities of inquiry that is currently transforming higher education based on collaborative constructivist principles.” (Garrison 2009)

The following is an abstract for a presentation at the MOOCs in Scandinavia Conference in Stockholm, Sweden, June 11-12 2015
In the following I will address student centric models for learning as represented in for instance connectivism (Siemens 2005, Downes 2012), social learning theory (Bandura 1963), situated learning (Lave et.al 1991), and networked learning (Goodyear et.al 2004). Secondly I’ll apply these learning models to MOOC design by discussing how social media (in casu Twitter) offers a ‘space’ for communication, collaboration and co-creation that support a more student centric learning model. Finally I’ll call for more experimentation in MOOC designs and research in the field of ‘MOOC pedagogy for a digital age’.

Clayton Christensen has labeled MOOC a ‘disruptive innovation’ (C. Christensen et.al. 2014) referring to the changes MOOCs might represent for the traditional educational model with highly subsidised and public funded brick and mortar schools. The online delivery model has the capacity to generate fundamentally different business models for education and, thereby, changing the ‘industry’. However, judged by most MOOCs Christensen’s concept of disruption doesn’t apply to the learning models. The pedagogical promises of the early MOOCs that they were part of a learning paradigm transformation for the digital age soon vanished in the rhetoric of disruption (Moe 2015, Stacey 2014).
Christensen’s disruptive MOOCs are called xMOOCs (Rodriguez 2012) and they represent a continuation of a teaching model where teachers handing over information to students. The Internet makes it easier to scale this delivery model beyond the classroom or lecture hall to the world as such. xMOOCs consist of video lectures, reading material, quizzes and assignments as illustrated here (Yousef et.al 2014 p.13): 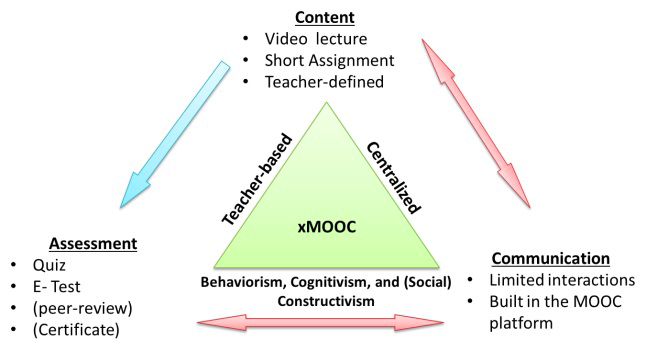 The benefit of this model is that it is flexible and adaptable to students’ personal needs. The model makes studying independent on time and place. It is possible for students to participate whenever and wherever convenient. By this MOOC design lots of students will have access to education that otherwise would have been impossible to them. Access to education for more is one parameter for evaluating quality of online learning. (O. Christensen et.al 2014 p.27). At the same time it is important that online learning is based on knowledge about how different online designs affect learning processes, learning outcome, student engagement and knowledge acquisition, knowledge construction and knowledge generation.
Educational researchers question if a pedagogy of delivery and acquisition is, actually, in sync with the digital age. (Ex: Beetham et.al 2007; Sharpe et.al 2010; Nussbaum-Beach et.al. 2011, Laurillard 2012).

Learning in the digital age

The first MOOCs were linked to the belief that it it was part of a greater shift in the way in which learning and education was changing due to societal changes. MOOCs was seen an integrated part of the developing network society (Castell 1996, Siemens 2005). The network society changes and reinforces a lot of societal phenomena in modernity. Knowledge is not ‘a secret for the few’ in that most information and ‘knowledge’ is available with a few operations on the Internet. This changes to some extend educational needs from knowing to searching - from possessing to networking. The role of knowing experts diminishes as a consequence of the wisdom of the crowd. (Surowiecki 2005)
It is possible to point at other changes in the current society as, for instance, the importance of mode 2 knowledge making collaboration and network more important as well as the importance of transgressing traditional scientific borders. (Gibson et.al 1996) The authors behind the theory of ‘mode 2 knowledge’, therefore, talks about this form of knowledge as “socially distributed knowledge.” (Nowotny et.al 2003 p.180)
xMOOCs are only an answer to educational needs for very disciplined and inner motivated learners. But if one considers MOOCs as part of a wider learning and educational ecology more supportive structures are needed. And for learners growing up in today's connected society the passive approach to learning can be seen as problematic. Rhona Sharpe ascertain that education to meet student need will have to adopt the idea of active, social learning: “...learners are becoming active participants in their learning experiences and are shaping their own educational environment.” (Sharpe et.al 2010 p.2)
In an even wider perspective the need for ‘Rethinking pedagogy for a digital age’ (Beetham et.al 2007) is also a societal need. In a knowledge society (Bindé 2005) new competencies are needed. In the current society there’s a need for collaborative problem solving without knowing all the details. Something that can only be taught by doing. That is why we are talking about 21st century competencies (Ferrari 2013): critical thinking, creativity, collaboration, networking, communication amongst other.

MOOCs was originally a response to some of these societal changes:

“MOOCs integrate social networking, accessible online resources, and are facilitated by leading practitioners in the field of study. Most significantly, MOOCs build on the engagement of learners who self-organize their participation according to learning goals, prior knowledge and skills, and common interests”. (McAuley et.al 2010 p. 10) 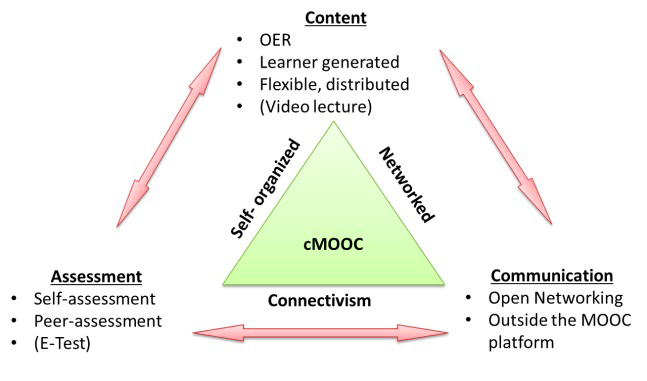 The idea of cMOOC is that learners are gathering around common learning interests and that they work collaboratively to achieve their personal learning goals. They form a community - and it is the community that scaffolds their learning. Learners in this model work like a network. The co-learners become part of each other's Professional Learning Network. For this process to happen the learners - the participants - have to have platforms for their communication, collaboration, co-creation and co-learning. Twitter offers a promising and dynamic learning network and might be a cornerstone of a Professional Learning Network (Nussbaum-Beach et.al. 2011) 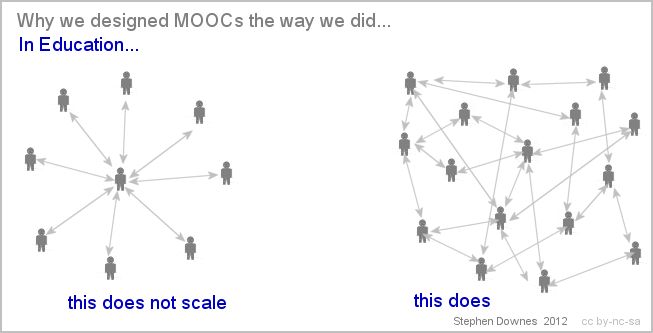 Fei Gao and co-authors have studied the effect of twitter integration in education up till 2011. They conclude that “microblogging has a potential to encourage participation, engagement, reflective thinking as well as collaborative learning under different learning settings.” (Gao et.al 2012 p.783) But they also conclude that there is “a need for rigorous research on” microblogging in education which is supported by others (Kellogg et.al 2014, Guàrdia 2014)
In their meta-study they stress that twitter is a particular promising tool for creating strong learning communities for a number of reasons. Not alone the collaboration but also the possible participation of people from the outside in the discussions is a benefit making learning much more authentic. Using social media and especially Twitter in education “promotes a collaborative virtual learning environment.” (Gau et.al 2012 p.783)

The very little research on online learning and social media suggest that much is to be gained from focussing on developing a student centric and community based pedagogy for MOOCs and online learning in general. But much more research is needed. Research in:
But for this research to be effective much more pedagogical experimentation is needed as well. Paul Stacey demonstrate the importance of pedagogical experimentation in his ‘Pedagogy for MOOCs’ and he use the DS106 Digital Storytelling course from 2011 as a case in point. The “model of having course participants collectively build the course assignments which are then used by students in future classes is a hugely significant pedagogical innovation.” (Stacey 2014 p.113)
One of the issues with MOOCs are that they suggest a disruptive innovation for a educational delivery and business model but at the same time suggesting an outdated pedagogical model that might serve the society badly when it comes to students and the competencies acquired.