This text is written as notes for my presentation at the researcED conference, London September 10th 2016 and Oslo April 22nd 2017

Often when the talk is about improvements in general or more specifically about how to improve education and educational institutions, people tend to focus on what is not working and how schools would benefit from changes - be it radical overthrowing traditional ideas about teaching and the organisation of schools or less dramatically small changes like stop doing something and doing something else instead.
The way in which changes in teaching and educational organisations are organized is very often through ‘projects’ - initiatives that cut into a part of the organisation and replace existing practices. According to the Business Dictionary, projects are a “planned set of interrelated tasks to be executed over a fixed period and within certain cost and other limitations.” (Businessdictionary)
Within an organisation the project often establishes a logic of its own. Some people and other resources are allocated to the project that also gets a lot of attention from the management. It is, after all, something new and interesting and everybody is very curious to whether this new way of doing or organizing things will prove a better way; will generate a higher output with a higher quality and demand less input.
Projects or initiatives are defined by what the organization and its embedded practices are not. It is exactly something new and the initiative is probably extraordinarily funded - it probably has its own project owner and a focused and engaged staff focused on proving the initiative to be the way for improving teaching and school.
Because it is defined as something special, initiatives are separated from the ‘normal’, the existing practices. And because the initiative is defined from the outside and often also uses external resources known as experts, it creates a world of its own complete with a vocabulary, ways of doing things, celebrations when milestones are reached and expectations are met - it creates a culture of its own as a parallel to the organisation it is supposed to improve.
For the organisation and its ‘normal’ practitioners who might be ‘victims’,  the changes and the initiatives are seen as something unfamiliar and un-understandable; something inconvenient and time-consuming. Fortunately, from the practitioners’ point of view such initiatives are only short-lasting, and they will go away again sometime soon.
I’m not saying that this will always be the case with initiatives as projects, but it is something a lot of practitioners - in our case teachers and other school practitioners - have experienced again and again.

Becoming the agent of change and development

Another problem with school improvement through clever and smart initiatives drawing on the latest research findings or trends, is that the subject or agent for the improvement often is a ‘change agent’ or ‘change leader’. A change agent is a certain role obtained by a trained ‘consultant’ of a kind. He or she ‘drives’ the changes by engaging stakeholders. When there are challenges with the project’s progress, it is seen as resistance to change, and the solution is to sell the changes to the hesitant stakeholders. Reluctant stakeholders have to be persuaded with by selling points as for example a burning platform, a new beginning, or a fabulous future. (REF will be added)
What I’m getting at here is that the change agent  becomes exactly the ‘agent’, the subject of changes and the practitioners are reduced to followers of the new instructions, the new practices or organisation. The change agent is the hero of the narrative of change by projects.
This narrative is, of course, exaggerated. And some projects are going fine. International research estimates that some 10-20 % of improvements by projects are successfully executed, which means that a majority of projects are seen by teachers as fallacies that steal time from what they really care about: teaching the students


School improvement through Professional Learning Networks (PLN) is an attempt to make the teacher the hero and subject of the narrative of change; of school improvement. A funded project running for 4 years has as its object to initiate that school improvement will be an ongoing process in two small Danish  municipalities with approximately 1,200 teachers situated in the region of Northern Zealand. Of course it is a paradox having a project that rejects improvement by projects. Project in our sense only means funding for initiating a process owned by schools and teachers.

Development should be grounded and continous

That initiatives as projects is a dubious strategy for school improvement is confirmed by Michael Fullan's research findings , one of the founding fathers of the whole system approach successfully implemented in Ontario, Canada. “The problem in education is not the lack of innovation and initiatives but rather the presence of too many fragmented, piecemeal, rapidly changing priorities” (Fullan, Michael (2010), The Big Ideas Behind Whole System Reform)
And in their book on how to lead schools and school districts with PLC, DuFour, the founding father of the concept of PLC and researcher of school leadership Marzona, the idea of Fullan is echoed: “One of the biggest impediments to improving schools is the unmanageable number of initiatives pursued by the central office and the total lack of coherence among those initiatives…
Effective districts identify a few key priorities and then pursue them relentlessly. They Make the PLC process the strategy for school improvement rather than one of fifteen different initiatives.” (DuFour & Marzano (2005), Leaders of Learning)
DuFour and Marzano point to the role PLC might play in improving schools as an ongoing process and not as an interruption - disruption - of the schools ordinary practices. School improvement should, according to them, be grounded in a carefully executed investigation on how a school is performing. Teachers, school leaders and other key stakeholders should determine improvement potentials and focus on them.
Improvement potentials should subsequently be broken down to goals and sub-goals, and the way in which teams of teachers and preschool teachers (PLCs) can work with these should be determined in open dialogue. It is important that the teachers and their expertise are acknowledged. It is likewise important that teachers work collaboratively with the goals and that they see each other as experts within different areas - in and outside their PLC.

PLCs has the potential to be an organisational cornerstone of school improvement. PLCs are in themselves very effective for enhancing learning for students. That is, if PLCs are developed according to the fundamental principles laid out in DuFour and tge work of others. PLCs are teachers’ teamwork focused on making action learning an everyday practice, hence making professional development part of the daily practice. A PLC “is an ongoing process in which educators work collaboratively in recurring cycles of collective inquiry and action research to achieve better results for the students they serve. PLC operate under the assumption that the key to improved learning for students is continuous job-embedded learning for educators”, according to Richard DuFour and colleagues (DuFour et.al. Learning By Doing. A Handbook for Professional Learning Communities at Work. p.11)
The very foundational principle in PLC is that it is grounded in teacher experiences and collective reflection on these experiences with the purpose of adjusting teaching practice. In a meta-study on PLCs, Vescio and her colleagues define two assumptions for PLCs: “Knowledge is situated in the day-to-day lived experiences of teachers and best understood through critical reflection with others” and “Actively engaging teachers in PLCs will increase their professional knowledge and enhance student learning.”
Teacher collaboration with a common goal will make teachers their own experts and by mutual reflection their knowledge will always be put to the test. In their common reflections, teachers - or their leaders - may bring in new knowledge, new research findings to strengthen the reflections and development of teacher practice.

School improvement through PLCs takes as a point of departure the current status - the teachers’ own practice and their context. The school organisation, their culture and the practices are not being wronged by a ‘right way’ of doing things. All development will take as a starting point where the teachers are and from there develop their practices from the team’s goal. School improvement is a question of the zone of proximal development (ZPD) or put in other words: PLCs will have teachers question their own comfort zone and make a push towards their ‘Struggle Zone’:
By always reflecting and discussing their own teaching practices teachers will continuously develop their own and colleagues’ teaching practices to the benefit of the students’ desired development - learning and thriving.
In their research on effective PLC Bolam and colleagues (Bolam 2005) find that high performing PLCs share five characteristics:
They also came up with three additional characteristics:
“The Project findings all confirmed the existence and importance of the five PLC characteristics identified in the literature review - shared values and vision, collective responsibility for pupils’ learning, reflective professional inquiry, collaboration focused on learning and group as well as individual, professional learning. In addition, three more characteristics were found to be important: inclusive membership; mutual trust, respect and support; openness, networks and partnerships.” (Bolam et.al. 2005, Creating and Sustaining Effective Professional Learning Communities. p.iii) These five plus three characteristics are also reflected in the PLC house or temple: 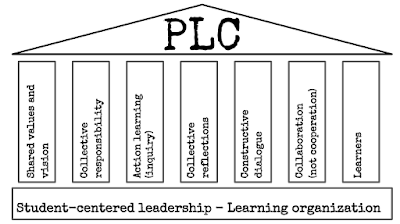 The way in which the teams develop these characteristics is through facilitation. The schools will organise teachers in teams with common tasks - be it a class, more classes, a subject or something else. Because of the collective responsibility it is important that the team has common tasks and a common goal. The facilitator will help keeping the team on track of its goal. The facilitator is not participating in team meetings to teach the teachers. His or her only task is to ask questions to whether or not the team is living up to their own expectations and the goals they have decided together with their leadership.
We have found that it is extremely important that leadership is highly visible for the team. Vivian Robinson’s findings on effective student-centered school leadership seems be be at the very core of successful school improvement through PLCs. The school leadership will have to set clear and meaningful goals for the teams, and they have to be engaged in the team development - both when it comes to the pedagogical goals and when it comes to team development.
It is evenly important that leadership and facilitators base their ‘intervention’ and ‘engagement’ on where the team is right now. The whole philosophy behind school improvement through PLCs is: “The journey of a thousands miles begins with a single step” (Lau Tzu)
In the ‘un-project’, facilitators are trained facilitators from a University College, but the schools and municipalities could just as well have educated their own facilitators amongst the teachers - or they could hire their own. In that way the schools would gain even more ownership of their development and improvements priorities and keep developing an organisational learning culture that continuously adapts to the changes of times.
Indsendt af Ove kl. 06.45 Ingen kommentarer: